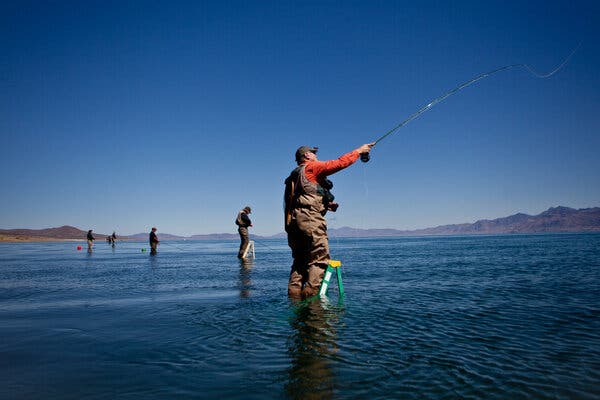 While I rounded a bend above the Windless Bay section of Pyramid Lake in Nevada, a strange sight appeared: a row of 40 or 50 ladders in the shallows, spread across half a mile.

It could have been mistaken for a public art installation or a painters’ convention gone awry. But I knew better. The ladders suggested there had been a congregation of Pyramid’s renowned Lahontan cutthroat trout. We’d do well to plant our own ladders for a chance to cast the distance needed to hook the trout of a lifetime.

Pyramid Lake rests in a bowl of stark mountains about 40 miles northeast of Reno, a mirage-like sight amid the harsh desert surroundings.

At 188 square miles and reaching depths of more than 300 feet, it’s the largest remnant of the ancient Lake Lahontan, which once covered much of Nevada. Formations of tufa, a porous limestone, dot the lake, including one that gives Pyramid its name. The lake and its surroundings are part of the Pyramid Lake Paiute Tribe Reservation.

Living in San Francisco 30 years ago, I’d occasionally hear whispers of the giant trout that once populated the Truckee River near Lake Tahoe. Named cutthroat for the streaks of red beneath their jaws, these fish were said to reach more than 40 pounds. They swam out of Pyramid Lake into the Truckee to spawn, sometimes reaching Lake Tahoe, 120 miles away. They seemed like mythical beasts. And they essentially were — the fish had been extirpated decades before.

“According to some accounts, the runs in the late 1800s were so prolific that you could walk across the fishes’ backs,” said Travis Hawks, a fisheries biologist with the Nevada Department of Wildlife who monitors the Truckee. “Commercial fishing efforts were substantial, and fish were used to feed miners in the Sierra and shipped to San Francisco. The Truckee isn’t a big river. You can understand how a few well-placed nets could prove very effective.”

Overharvesting depleted Pyramid Lahontan trout populations, as well as water diversion projects — most notably the Derby Dam, completed in 1905 — sealed their fate, as fish could no longer reach their spawning grounds. By 1943, Lahontans were declared extinct in Pyramid Lake.

But they weren’t quite extinct. 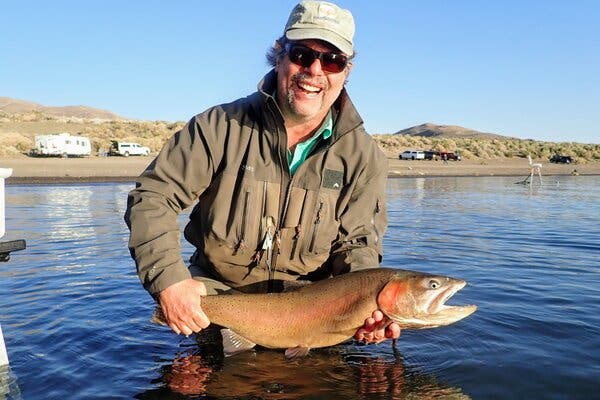 The author of the article with a Lahontan cutthroat trout, which was safely released to grow larger.

Decades ago, a group of interested citizens began taking juvenile fish from Pyramid Lake and placing them in streams across the state. Many of the fish did not survive, but in one small stream near Pilot Peak on the Nevada-Utah border, they did.

Don Duff, a U.S. Forest Service fisheries biologist, discovered the fish there in the late 1970s, and shared his findings with Robert Behnke, an authority on classifying fish in the salmon family. Behnke believed these fish could be remnants of the Pyramid Lahontan strain.

In the mid-1980s, a strain of Lahontan cutthroat trout from Summit Lake in northwestern Nevada was introduced to Pyramid. The fish thrived and continue to reside in Pyramid, but they did not show the longevity or the incredible growth potential of the original Pyramid strain.

In the early 1990s, word of the discovery at Pilot Peak reached Lisa Heki, who is now the project leader for the Lahontan National Fish Hatchery Complex within the U.S. Fish and Wildlife Service. A lifelong Nevadan and advocate for native fish species, she was intrigued. Heki used her station resources to oversee the development of the Pilot Peak broodstock program at the hatchery in Gardnerville, Nev.

“I trusted that the genetic legacy of the original Pyramid Lake population would be expressed if the fish were returned to their original habitat,” she said.

Heki contracted with Mary Peacock, a professor of biology at the University of Nevada, Reno, to do a DNA analysis, and Peacock’s team established a protocol to extract DNA from museum specimens of Pyramid Lake Lahontans. The DNA matched with samples from the Pilot Peak fish.

The Paiute Tribe and U.S. Fish and Wildlife agreed to introduce the fish from the Lahontan Hatchery into Pyramid in 2006. “By 2010, anglers began catching big trout,” Peacock said.

A milestone has been reached in the Pyramid Lahontans’ resurgence: This year, nearly 1,500 fish have returned to the Truckee to spawn, some making it as far as the Derby Dam. Several fish were manually passed around Derby to continue swimming west. A $48 million retrofit of the dam was recently completed to facilitate fish passage. Lahontans may one day reach Lake Tahoe again.

The lure of truly big trout — and the thrill of encountering a fish that was once thought to be extinct — had me and a friend strapping house ladders to our car roof for the 11-hour ride from Portland, Ore., to Pyramid in early April. Dwindling steelhead returns on our home rivers had made encounters with our local big fish rare. We hoped the Lahontans would fill the void.

Our ladders seemed pedestrian next to the local models — custom contraptions made by a Reno craftsman which included a platform and a padded seat.

“When people first started fishing the lake, they used milk crates,” recalled Joe Contaldi, principal guide with Pyramid Lake Anglers. “This helped them cast far enough to reach the drop-offs where the fish cruise looking for food. And it also helped them get above the cold water.” The crates gave way to conventional ladders and then to chair ladders.

Pyramid Lake strain Lahontans grow so big in part by foraging on other fish — primarily tui chub and cui-ui, a sucker fish endemic to Pyramid Lake. But they will also eat beetles and chironomids, an insect the size of your pinkie nail. A number of flies have been developed for Pyramid, including the Popcorn Beetle and the Booby. The latter features two foam eyes that might resemble … well, you can imagine.

Fly-fishing at Pyramid Lake is subsurface, and falls into two basic techniques: Anglers will cast sink tip or full sinking lines on sturdy 7- or 8-weight rods as far as they can and strip the fly — a tui chub or beetle imitation — slowly back. Alternately, anglers can cast a floating line with an indicator (fly-fishing lingo for a bobber) to suspend several flies, often a balanced leech and a chironomid pattern, in the water column. When the indicator moves, the angler sets the hook.

We didn’t land any fish in that class, but we each found trout eclipsing 10 pounds, fish large enough to jolt our rods like the steelhead we seek at home and to oblige a fellow angler to scramble off his ladder to assist with a net. While anglers are permitted to keep limited numbers of fish for consumption, most anglers practice catch and release. Releasing the fish into the slightly salty water was a moving experience, a brief dance with a troubled past and a hopeful future.

For anglers who crave seclusion, Pyramid may be less than ideal. With the assemblage of anglers lined up along Windless Bay, conversations were inevitable. On our last day, an adjacent angler, Alex Varner, invited us to an impromptu barbecue. “There’s a camaraderie out there on the best beaches,” Contaldi said. “People who don’t want to be around others will find a different place.”